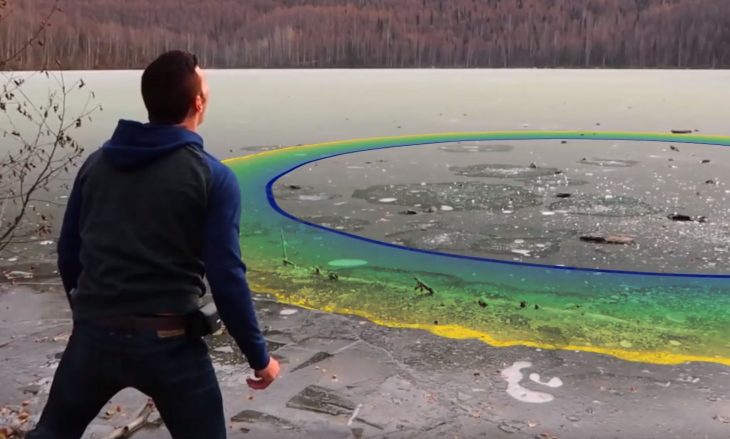 The blaster sound effect from Star Wars is immediately recognisable. While real laser devices emit very little sound, those handy firearms from “a long time ago” produced a distinctive “pew” that showed they meant business; even in the hands of notoriously off-target Storm Troopers.

How was this iconic sound created? As it turns out, foley artists working on the original Star Wars stumbled upon the high tension wires that extend down from AM radio transmission towers. Hitting one with a metallic wrench provided a sound that started with a high pitch, before quickly descending into a lower frequency. This is caused by acoustic dispersion.

Just how does the science of sound explain this phenomenon? Watch this explanatory video to find out:

Is this the real lightsaber you’ve been waiting for?

Okay, so it’s not a laser. It’s not ultra heated plasma. It’s just fire, fueled by butane and ethanol. In that way, it’s more like a tiny flamethrower or a giant cigarette lighter, but it’s still somehow magical. 🙂

If someone was to gaze deeply into the soul of the average Star Wars fan, they’d find that most of us would secretly love to own a real lightsaber. If that did happen, limbs would be lost far too frequently, so it’s probably not a bad thing that real, laser-based lightsabers remain a far-off dream. Nevertheless, it’s always exciting when someone does create a device that looks and works similarly to the imagined noble weapon.

This is one of the best I’ve seen so far. Though it is basically a huge butane lighter, it looks the part, functions fairly well and is just dangerous enough to make one think twice before wielding it without training. Oh, and the creator uses it to destroy Jar Jar Binks, which is always a bonus.

Galactic Empire brings the power of rock to the Force

What happens when you bring Darth Vader, Boba Fett, a stormtrooper, a Red Guard and a shadow stormtrooper together in a garage? You get a sound that rocks the Force.

Listen as the members of tribute band “Galactic Empire” let loose on several of the most iconic songs from the Star Wars soundtrack. How they manage to play this well while wearing thick leather gloves, I’ll never know, but it is impressive.

The performers at RoyishGoodLooks have outdone themselves, with a parody of Adele’s anthem Hello that hits all of the right notes.

Hello from the Dark Side somehow still possesses the same emotive vocal impact that Adele delivered in her recent hit, while telling a sombre tale of Vader’s failure to convince Luke to follow in the family business. The result is humorous, catchy and guaranteed to be stuck in your head for days. Listen and enjoy!

Lightsaber Escape – Google turns your phone into a game controller

This is so exciting. I still remember the days when online movie promotional tie-ins were relatively innocuous websites featuring hidden content areas or spoof videos. Google has kicked things up a notch with the release of “Lightsaber Escape”.

Billed as a “Chrome experiment”, Lightsaber Escape is a free online game that transforms your phone into a lightsaber handle (or hilt). To play the game, you need to be using the Chrome browser on your PC and have Chrome installed on your phone. Getting started is then as simple as following these steps:

Google has put the phone’s vibrate function to good use in providing tactile feedback, and the audio coming from both the desktop and phone provides a fairly immersive experience.

This is a simple game, but it’s nevertheless an impressive promotional cross-over, and a clever use of multiple devices, associated through a web browser. I hope you have as much fun with the game as I did.